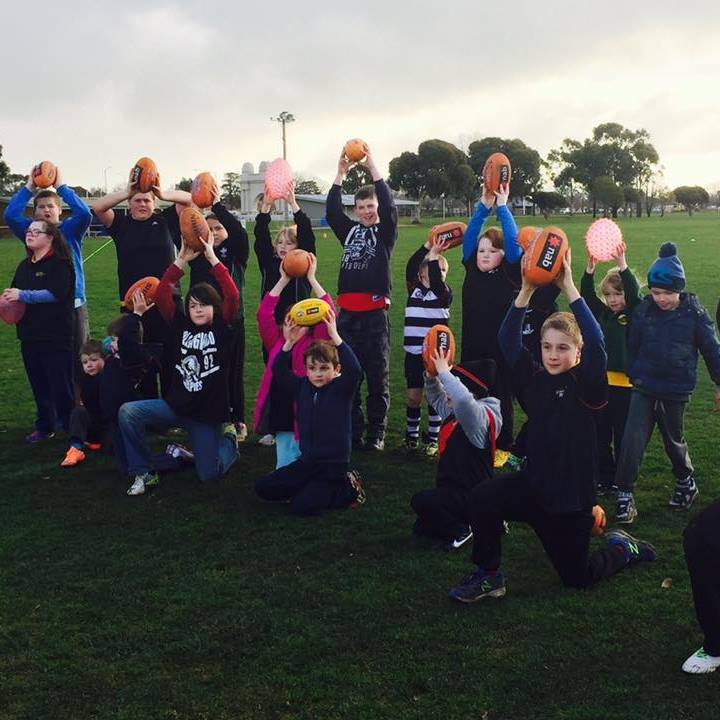 Sport is to be loved by ALL…

There’s something almost a little but magical about what happens on the oval at Ballarat Grammar on Sunday mornings. Kellie and Brad Tait are there, of course: they are every week during the last three school terms of the year. But there’s also a bunch of kids tearing about on the grass, some kicking a soccer ball, some taking a mark, and some searching for Kellie and Brad’s faces, just for a bit of extra reassurance.

The kids are crazy, in that special way that only kids can truly be. The kids also have some special needs that mean they can’t participate in the traditional forms of Auskick, Milo Cricket, soccer and netball and thanks to Kellie and Brad, these kids aren’t being left on the sidelines anymore – they’re taking their rightful places on the field, and they are quite literally kicking goals!

“We really want the kids to be part of a team and do everything the other kids do. It’s modified a little bit so it is easier for the kids to do, and yet they’re still successful,” Kellie explains. It all started with Kellie and Brad’s son Cooper, five at the time, who was struggling to participate in the mainstream Auskick program. “He just couldn’t cope with the fast pace of it, the quick instructions and the amount of other kids involved – there’s usually 100+ kids involved in a session,” says Kellie, so she decide to take things into her own hands.

Kellie contacted the AFL and they told her while they didn’t have an all-abilities program at the time in Ballarat, they were definitely keen to start one. “So we put our hands up for it, and that’s where it all started.” From one family’s determination, AAA (Access All Abilities) Sports, was born.

When they say all abilities, they mean it. Kids are participating with vision impairments, cerebral palsy, autism, muscular dystrophy, ADHD and Downs Syndrome. “We have a really unique background of kids that come through. And all of these kids are forming beautiful friendships with kids that are a similar ability with them.”

Kellie modifies the drills and writes lesson plans – and Cooper is, of course, one of the most enthusiastic participants. “It’s been really rewarding and it really helps us with Cooper, all the things that are helping other kids help him too,” says Kellie.

In the beginning it was all about Auskick, but now, Kellie and Brad have a full season of Auskick as well as Milo Cricket under their belts – and national bodies are knocking on AAA’s door to ask them to work their magic on more and more sports.

“Since Auskick and Milo Cricket, we’ve been contacted by Netball Australia and Football Federation (soccer), I haven’t been able to say no yet!”

This year, term two included footy and netball, term three is soccer, and term four will be cricket, and as with every aspect of the programs, the routine and timing of the seasons is extremely well-planned. “We take the first term of the year off to help Cooper settle in to school. Having that first term just to rest and relax, and get the stresses of new routines out of the way, and then focus of getting a bit of physical activity in the later terms, it works really well,” Kellie explains.

The physical activity is also boosted by incidental learning – through sport, the kids are also learning ideas of taking turns, of conversation and social interaction. The programs are modified to fit the needs of kids of all abilities, and although about 80 kids are involved overall, session sizes are about 25-30, allowing kids to not be overwhelmed by intensely large groups.

“It’s based on the mainstream programs, but we slow it down –  we make it more fun with more games that will help the kids be more engaged,” says Kellie. The only remaining problem was the need of a permanent home for AAA. “As we don’t make any money, it’s a completely volunteer-run program. I needed a venue that would let us use their facilities for free,” so Kellie approached Ballarat Grammar, and a new mutually beneficial partnership was established.

Of a Sunday morning, AAA Sports gets full use of Grammar’s facilities, including access to the indoor gym so that even if the weather is too awful, they don’t have to cancel, they can just go inside. Also, Grammar students are allowed to participate as volunteers and they are getting their community volunteer hours experience.

“We’ve been really lucky to have the Ballarat Grammar kids helping us, and a permanent home. Our kids are getting one-on-one support because we’ve got the Grammar students that can work one-on-one with them, and really tune into their fine motor and gross motor skills – it’s been wonderful to have their support.”

The support helps, but Kellie and Brad are still running every session, with their familiar faces offering reassurance to many of the kids, an important point of reference for them that the mainstream version cannot beat.

Learning what is required of them and often going above and beyond even that, Kellie and Brad have experienced quite a journey in working out how to operate a variety of programs for all-abilities kids – something they had certainly not done before. “It was so daunting, because my husband and I had never done anything like that before – we love football, but we don’t have much of a background in sport.” Kellie’s skill at organising such large-scale ventures may well be in her blood. “Dad used to organise supporter buses to Tigers games,” she says, “I’ve grown up watching mum and dad do it, and maybe a little bit of that has rubbed off on me.”

Kellie Now has a group of mother helping with the organisational demands of running AAA Sports – but it’s the love of the job that keeps her motivated, week in, week out. “We really love it, so the time it takes up doesn’t really fuss me because we are enjoying it so much.” Plus, there’s always the smiles on faces Sunday morning.” “All of these parents are just so thrilled to see their kids succeeding.”